History of the Arpin Library 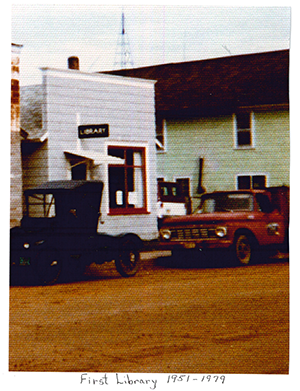 On May 22, 1951, the John B. Arpin family presented the Arpin Community with a gift of books. In addition, an office chair, a desk, and a sum of twenty-five dollars were donated. The Arpin Community budgeted the twenty-five dollars toward the rent of a room in the back of Gertie Elmer’s Variety Store. Community volunteers built shelves and supplies were ordered. Long hours were spent by the library's volunteer staff to catalog and shelve all the books. The new library officially opened to the public in November of 1951. Mrs. LaVon Nelson, the first head librarian of the Arpin Library and an instrumental part of getting the library started, currently holds the longest length of service as a head librarian/director, with 21 years of service.

In August of 1973, the Arpin Library was state approved and increased it's hours from 5 to 10 a week. In 1979, grants to Wisconsin libraries were cut from the state budget. The Town and Village of Arpin agreed to each cover half of the expenses in order to keep the library running. By August 1980, DuWayne and Betty Bauer offered a three year lease on the use of space in their building for 110.00/month, a deal that offered more space for the expanding library. In September 1980, the library accepted the offer and relocated to space adjacent to what was Engelbright's Grocery Store.

By 1985, the library was on the move yet again due to the purchase of the store and resulting remodeling for a new restaurant that would be opened in the space. The library was temporarily relocated to the Arpin Town Hall. During the interim, Village and Town meetings were held to find a home to the library. Unfortunately, there were some suggestions that the library should be dissolved!

After a period of time, Arpin community member Art Stoflet offered to rent available space that was in the same building as the post office, and the library was relocated. It was in this space in June 1994 under the head librarian David Sumter, that the library moved from Wisconsin Valley Library System to our current system, South Central Library System.

By 1999, the lease in the space adjacent to the post office was soon to end and the Library and Town of Arpin Boards began the consideration of their next step. An agreement was made between the Village and the Town of Arpin that the Town would own the Library; officially decided by June 2001. The Town of Arpin purchased the grocery store building and had the space remodeled for the benefit of the library, which became the next location for the Arpin Library in December 2001.

In September 2002, Mr. Charles Lester met with the Library Board to discuss plans for a new building, a convenient location solely for the library. He offered to fund a [50ftx50ft] building, but the town would be responsible for the administrative aspect of construction. The town and board accepted the offer and land was purchased from community member Mark Yerke. In September 2003, ground broke for the construction of the new building. In March 2004, due to the generosity of Mr. Charles Lester and his wife JoAnn, the new building was finished and the library began to move into the space. The library was officially renamed the Lester Public Library of Arpin. It is within this building that the Lester Public Library of Arpin resides today.

Excerpts taken from history written by Lorraine Voight. Full history available in our history of the library binder.